Skip to content
Present day oil analysis is done by using optical emission spectroscopy (OES) to measure the ppm (parts per million) levels of wear metals, contaminants and additives in oil samples. This paper provides an overview of Rotating Disc Electrode Elemental Spectroscopy and its use for in-service oil analysis applications. Today, spectrometric oil analysis finds application in any closed loop lubricating system such as:

• No sample dilution, no solvent
• Only use 2 ml of oil
• 30 second test time with up to 31 elements simultaneously measured
• Sub PPM lower limit of detection (LOD) for most elements
• Push button operation, simple to use for both laboratory and on site applications
• Conforms to ASTM-D6595 (Oil) and ASTM-D6728 (Fuel)

Table 1 shows typical metal elements can be analyzed by spectroscopy and their sources.

Table 1. Typical source of elements analyzed by spectroscopy in oil

Spectroscopy enables the detection and quantification of elements present in a material. Spectroscopy makes use of the fact that each element has a unique atomic structure and when energy is applied, each element emits light of specific colors or wavelengths. The principles of spectroscopy include the following:

Spectrometers that view the large number of spectral lines from a heated or an excited sample are called optical emission spectrometers. All optical emission spectrometers consist of three main components, which are: Since early days of spectroscopic oil analysis, oil has been burned or sparked between a rotating carbon disc electrode and a carbon rod electrode. The sample is placed in a sample cap, the disc is partially immersed in the oil sample and the disc rotates as the burn proceeds as shown in Figure 3. 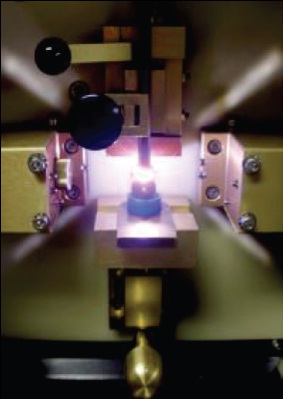 This needs about 2 or 3 ml of sample based on the exact cap used. For elimination of sample carryover, a fresh disc and a newly sharpened rod are required. This method is known as the rotating disc electrode (RDE) optical emission spectroscopy (OES) , or combining the two, RDEOES. An optical system separates the light coming from the plasma into the discrete wavelengths of which it is comprised. An optical device known as a diffraction grating is used to separate the discreet wavelengths. Figure 4 shows the major components of an oil analysis spectrometer using a polychromator optic based on the Rowland Circle concept. 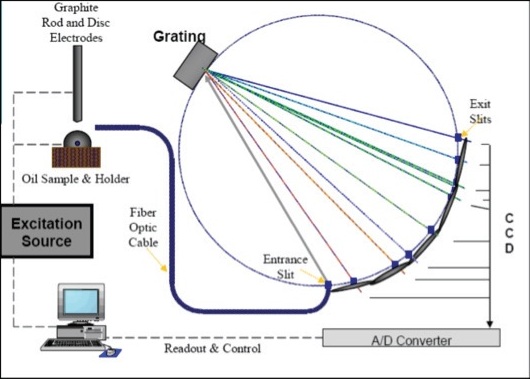 During design of a spectrometer the key consideration is the region of the spectrum where the wavelengths of interest occur. Light is emitted by most elements in the visible region of the spectrum. There are elements that emit mainly in the Far Ultra Violet (FUV) region of the spectrum. This is significant as FUV radiation does not transmit well through air; rather, it is mostly absorbed. In order that the optical system is able to view spectral lines, it needs to be mounted in a vacuum chamber or filled with gas transparent to FUV light, so the emitted light can reach the grating, be diffracted, and then be detected at the focal curve. Hence a gas supply system or a vacuum pump and a sealed chamber are part of the system. A spectrometer’s readout system is controlled by industrial grade software and processor. An amplifier and a clocking circuit reads the charge on a Photo Multiplier Tube or CCD chip and converts it from an analog to digital (ADC) signal to measure the light that has fallen on a pixel. The charge on a pixel is converted to an arbitrary number defined as “intensity” units. Once the analysis is completed, the total intensities for each element are compared to calibration curves stored in memory and converted to the element concentration in the sample. Concentration is normally expressed in parts per million (ppm). This data can be printed on a printer or displayed on a video screen. On completion of the analysis or recording of results, the system is ready for the next analysis. The analysis results may be left on the screen, stored on the hard disk, or can be sent to an external computer. A conventional spectrometer of the 1970s is shown in Figure 5. Figure 6 shows the Spectroil Q100, which weighs only 163 lbs (74 kg) with a very small footprint while still maintaining the same analytical capability as the bigger systems in previous generations. 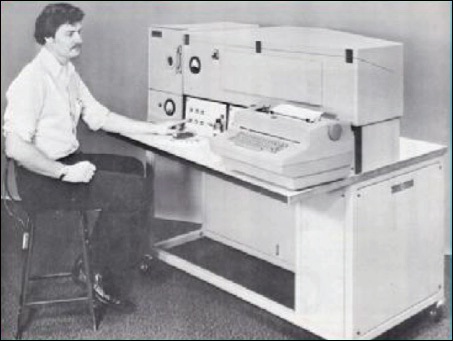 Figure 5. A Direct Reading Oil Analysis Spectrometer from the 1970s 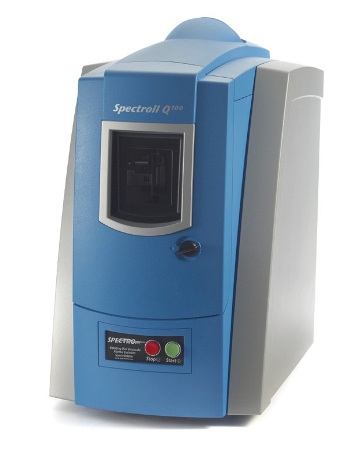 The complete automation system is mounted to the spectrometer sample stand and fulfills all the functions of sequentially introducing and removing oil samples and exchanging graphite electrodes. It is self-contained and works independently of the spectrometer operating software.

One of the shortcomings of spectrometers is the ability to identify and quantify large wear and contaminant particles. Today, the particle size limitation of RDE spectrometers has been eliminated with simple ancillary systems such as the rotrode filter spectroscopy (RFS) method, which involves the following:

The RDE spectrometer is mainly designed for used oil and fuel analysis, several methods and recent enhancements have increased productivity through expanded capabilities. A used coolant analysis program detects both the coolant condition and the presence of any contaminants or debris. The coolant fluid can be used as a diagnostic medium as the coolant carries heat away from the engine parts as well as fine debris from the interior surfaces of the cooling system. Analyzing the wear debris can offer key data on the condition of the internal parts of the cooling system. Lubricant mix-ups often occur when an oil system is “topped off’ to replace the oil that has been lost due to use or leakage. Table 2 is a summary of the last four spectrometric oil analyses for a medium speed diesel engine from a locomotive.

In summary, RDE Optical Emission Spectroscopy has gone through a number of changes rendering it suitable for applications in a wide range of industries as a reliable tool to analyze fluid samples for condition monitoring and quality control applications.

This information has been sourced, reviewed and adapted from materials provided by AMETEK Spectro Scientific.

For more information on this source, please visit www.analisapelumas.com.